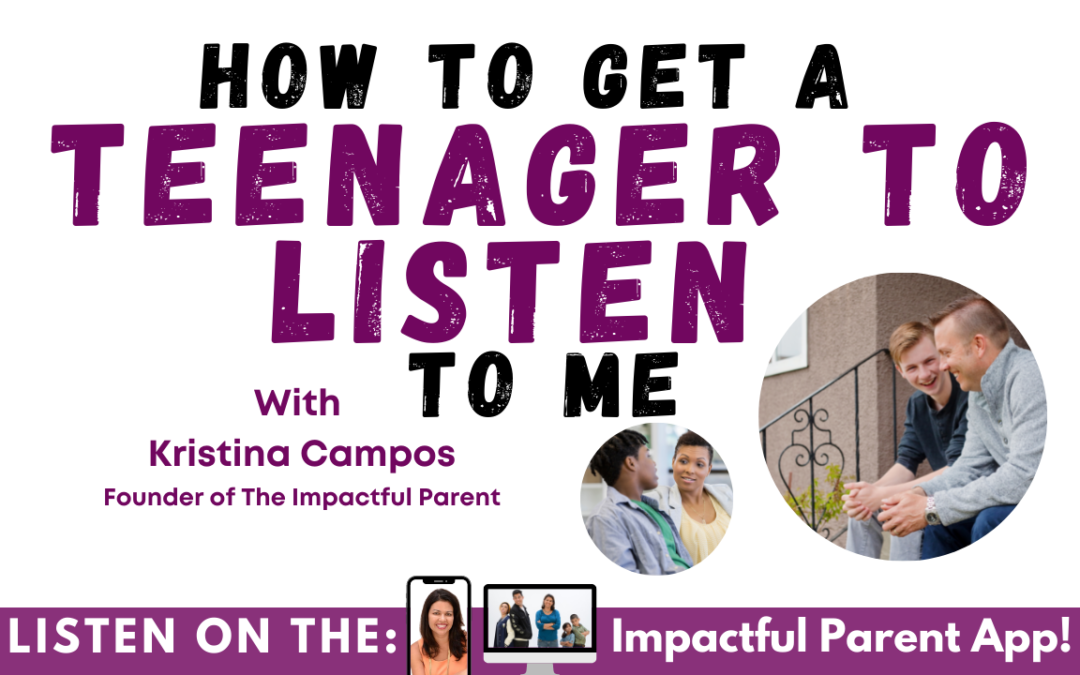 Kristina Campos, the founder of The Impactful Parent, talks about Mathew Hussey’s 7 tips for making a bigger influence. Kristina translates Mathew’s suggestions to share how parents can get their teenager to listen. This is a MUST-SEE episode for anyone wanting to create a bigger influence in their teen’s life and well being.

Watch the Video below

LINKS MENTIONED IN THE RECORDING

www.howtogettheguy.com for more from Mathew Hussey

Oh man, my teenager is making bad choices. Stupid choices, actually. When are they going to learn? I tried giving my teen advice, but all they do is roll their eyes and look the other way. It’s like I’m talking to a wall. Mistake after mistake… one of these days, their mistake will be really bad, which terrifies me. How can I get my teenager to listen to me?

Hello, my name is Kristina Campos. I am the founder of the Impactful Parent. Every week I give you parenting videos that can help you in your parenting journey. If you have a particular topic or parenting question about your school-aged child that you would like me to address, please submit it at theimpactfulparent@gmail.com or by messaging me on social media. All submissions are kept anonymous.

Most parents are bracing themselves for those teenage years. Those years when you expect rebellion and bad choices. But let me tell you a little-known secret…. Your child doesn’t have to rebel. Adolescent years are about finding your own way and discovering the world through experiences. Your child doesn’t want to rebel against you, but they want some say in their own lives. They want the power to make their own choices. If you don’t allow your child to make their own choices, this is when rebellion rears its ugly head.

As children grow older and the exchange of power shifts from parent to child, the parent will eventually lose total control. INFLUENCE is the only thing that remains after the child is old enough to rebel and take care of themselves. Yep, I said it. Parents can not force their children to do anything they don’t want to do after a certain age. Parents will lose control. The mom and dad may try to make the child’s life so miserable that the only desirable choice for the adolescent is to comply; however, in the end, it is still the child’s choice to comply.

So if influence is the parent’s best “playing card” to have a say in a teenager’s life and help them make better decisions, how can parents create the most influence? This is the golden question!

Today, I will tell you HOW to create the most influence when talking to your child and stick around to the end because this episode is a must-see for any parent with a school-aged child. Let’s get started!

I was scrolling through my Instagram not too long ago, and I stopped on a video of one of my favorite relationship coach’s posts, Mathew Hussey. Mathew Hussey helps women “Get The Guy” by coaching females in relationship advice.

In this episode, Mathew teaches 7 Powerful People Skills To Make You Stand Out. This episode is a little off the beaten path of Mathew’s typical advice. Still, as I watched, I thought to myself, THIS IS EXACTLY what parents need to know to make a bigger influence on their teenagers. This is the essence of how you get a teenager to listen! So, the 7 steps I am teaching today are not my own. They are Mathew Hussey’s 7 steps, but I will translate his advice into the parenting world for you today so you can make a difference in your household.

Mathew Hussey’s Advice #1: Silence is a virtue. Too often, parents don’t listen to their kids. They might THINK they are listening to their kids, but they are really listening to respond instead of hearing their child’s point of view.

It is not easy to truly listen. You must sit in silence and allow the other person to talk, resisting the urge to say your two cents until the other person is completely done with their thoughts. Most teens don’t talk to their parents much, but they have a lot to say when they do. So, listen to your teenager. The only way to do this is to sit in silence.

Mathew Hussey’s Advice #2: Fight the urge to interrupt. This piece of advice goes along with advice number 1. How can you listen to your child if you interrupt their train of thought and start talking? You can’t. You have to let them finish talking before you respond. Before you even open your mouth, let them get out the whole story, all their feelings, concerns, and ideas. Fight the urge to respond until they have paused for 5 seconds. 5 seconds is a long time when you’re in the middle of a conversation. (pause for 5 seconds. Count in your head and feel how long it takes). 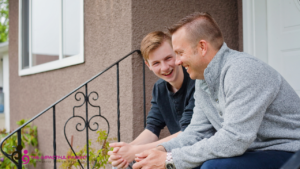 I will let you in on another little secret. Even when teens are talking to you, they don’t really want your opinion at that moment. Instead, they want to be heard. They want someone to help them but not make choices for them. They need someone to tell them they will be ok, they are on the right track, and that someone cares about what they are going through. Many parents hear their child complaining and immediately want to “fix” everything. They go into advice mode or say, “when I was your age….” But stop. You will get your opportunity to speak, but that opportunity does not come until AFTER the teenager has spilled out all they had to say.

Mathew Hussey’s Advice #3: Attack with humility. When it is time to speak, parents need to structure their advice to sound like a suggestion and not a command. Teens don’t want to be told what to do. They want to make their own choices. So if you want your child to listen to you, it is best not to come off as aggressive. Instead, ask your teenager, “Would you like to hear my point of view?” or “Would you like some advice?” or “Can I tell you how it sounds from the outside?” Then, Mathew Hussey recommends you structure your opinion with these words, “I am going to lay out my opinion, and you tell me why I am wrong.” I love this suggestion by Mathew because it allows you to express your own feelings and guidance and still gives the child an opportunity to take your advice or leave it. Also, it even keeps the door open for more conversation and opinions to be discussed. Now the teenager doesn’t feel like you’re trying to control them. Instead, they feel like you’re trying to help.

Mathew Hussey’s Advice #4: Don’t be a know-it-all. This is one of the biggest turn-offs for teenagers and the quickest way to get ignored. Teens will even purposefully ignore your advice to prove you wrong if this is how they perceive you. Besides that, parents don’t need to know all the answers! It’s ok to not know what to do and not be able to give help. In fact, allowing your child to solve their own problems and learn to navigate tricky waters is a good thing! You are there to support them! That alone is enough. You don’t have to fix everything and know all the answers! 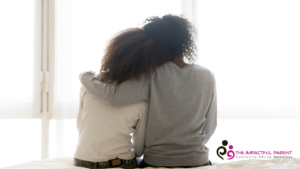 Mathew Hussey’s Advice #5: Let your arguments wade in before you do. Mathew explains that sometimes when we disagree with what someone says, we immediately jump in and say, “I think this….” But the truth is, teens may not want to know what you think. Sometimes, our job as parents is to add value to the conversation by presenting to our teenagers a different perspective or the other side of the story, but NOT to put forward our own personal bias. Mathew suggests that one of the things you can say when you disagree with your teen is, “I think there’s a couple of things worth considering here.” This line allows your teenager to be open to what you’re about to say because you haven’t made them wrong by telling them other points of view. This is extremely important and brings me to #6.

Mathew Hussey’s Advice #6: Argue with the argument, not the person. If your teenager thinks you are attacking their ideas, you will be immediately shut out. They will go into fight or flight mode, and now you might as well be the teacher in Charlie Brown’s classroom, “Wha Wha Wha.” Even if you completely disagree with your teen’s perspective, you can’t come out and tell them they are wrong. Instead, Mathew suggests you say something like, “Here is my issue with that.” You have to make the argument your opponent meanwhile keeping your child as an ally. This means expressing your opposing opinions in the third person and not directing opposition at the child. No wagging fingers. No loud tone. No aggressive words. The bottom line is that your child can’t feel attacked.

Mathew Hussey’s Advice #7: Don’t oversell your point. Mathew’s last tip is about your victory. If you do all 6 steps correctly, your teen will actually hear you. They might even start nodding and say, “Thank you, you’re right.” When this happens, don’t boost! That’s going to revert you back to appearing like a know-it-all. You don’t want that, remember!

It will also be your natural reaction to reiterate that “ah ha” amazing point. Don’t do that! Repeating what your teen has already heard only annoys them! You don’t need to repeat yourself. In fact, saying it only once is much more powerful and allows teens to let that idea sink into their heads. They need time to process your new idea and ask questions. If you start talking again, you aren’t allowing them to do that.

If you thought today’s advice was beneficial, I recommend you follow Mathew Hussey online. You can find him on Instagram @themathewhussey or his website at www.howtogettheguy.com. His work is brilliant, and his niche is helping single women find love and confidence.

But until next time, you got this parents. I am just here to help.

If this information was valuable for you today, BECOME a more impactful parent by downloading The Impactful Parent App. The Impactful Parent app is FREE and full of episodes like this one that will help you in your parenting journey. Investing in your family looks like learning the warning signs of certain behaviors so you can stop bad things before they start, discovering new parenting techniques to make your parenting more effective, and joining a community of like-minded parents that also want to be the best parent they can for their child. All of this, plus so much more, can be found inside The Impactful Parent app, so download it today. You got nothing to lose with this free parenting resource. Go to theimpactfulparent.com and discover how you can step up your parenting game and be a more impactful parent.

What to do next:

It takes a lot to run a household! Here are a few products I USE and recommend:

Gabb Wireless: The BEST first phone for your child!